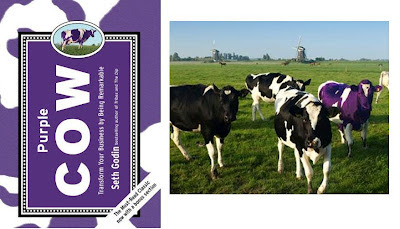 Let's start by looking at uniqueness...

I used to think my name was pretty unique, but even pre-internet I found out about 7 other people called David Solomon living in Australia. I had never met any of them, but occasionally I'd meet someone and they'd ask me "Are you the David Solomon who...?" Nope, they weren't me, so I quickly learned to differentiate myself. After all, I didn't want to be held accountable for their actions and deeds - only my own.

When looking at uniqueness, I think it is hard to go past the 2003 groundbreaking book by Seth Godin - In Praise of the Purple Cow - making and marketing remarkable products.

Godin talks about driving through France with his family and how they were enchanted by the hundreds of storybook cows grazing in lovely pastures right next to the road. For kilometres, they all gazed out the window, marvelling at the beauty. Then, within a few more minutes, they started ignoring the cows.

Why? Well the new cows were just like the old cows, and what was once amazing was now common. Worse than common - it was boring. You see, cows - unless perhaps you're a farmer or a butcher - after you've seen them for a while, are boring. They may be well-bred cows, Six Sigma cows, prancing cows, cows lit by a beautiful light - but they are still pretty boring.

But Godin thought "...a Purple Cow - now that would really stand out!"

The essence of the Purple Cow - the reason it would shine among a crowd of perfectly competent (even undeniably excellent cows) - is that it would be remarkable. Something remarkable is worth talking about, worth paying attention to. Boring stuff quickly becomes invisible.

Godin says that the world is full of boring stuff - brown cows - which is why so few people pay attention. And remarkable marketing is the art of building things worth noticing right into your product, service or brand. Not just slapping on the marketing function as a last-minute add-on, but also understanding from the outset that if your offering itself isn't remarkable, then it's invisible - no matter how much you spend on well-crafted advertising.

Today, the one sure way to fail is to be boring - and therefore invisible. Your best chance for success is to be remarkable.

Another reason the Purple Cow is so rare is because people are afraid of rejection. If you're remarkable, then it's likely that some people won't like you. That's part of the definition of remarkable. Nobody gets unanimous praise - ever. Criticism comes to those who stand out - it's part of the territory.

Not standing out, playing it safe, following the rules - they may seem like the best ways to avoid failure. However, that pattern isn't safe. In a crowded marketplace fitting in is failing. In a busy marketplace, not standing out is the same as being invisible.

Seth Godin himself demonstrates himself to be a remarkable Purple Cow. (His blog is at http://sethgodin.typepad.com/ - it's worth checking out.)

In previous blogs I've written about several examples of performing artists who have been very clear about who they are and what they stand for. These include Cirque du Soleil, Kylie Minogue, Lady Gaga and The Grateful Dead.

As a result, these artists have created very clear CVPs or Compelling Value Propositions.

I work with women entrepreneurs who feel overworked and getting nowhere, so they end up frustrated and unsure of how to move their businesses forward. I help these women build a Higher Purpose Business so that their business works for them, rather than them working for it.
To know more about my approach to business, check out http://quidditybusiness.com.au

Posted by MAPLE DREAMS at 10:11 AM No comments: