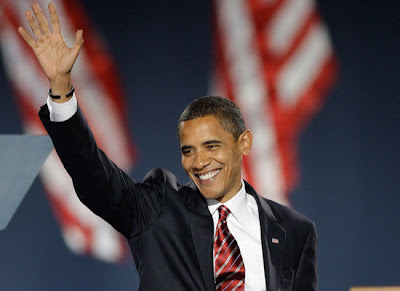 By Clement Sadjere
It was an unprecedented event in the history of mankind, when for the very first time, an African American became president of the greatest country in the world: United States of America. It was a memorable event that inspired confidence in the black race. The election has come and gone, but there are few lessons to learn from it.
Self-confidence
Self Confidence is a key factor in the success equation. It is easy to get demoralized, frustrated and resentful if you lack self-confidence. Marcus Garvey once remarked: "if you have no confidence in self, you are twice defeated in the race of life. With confidence, you have succeeded even before you have begun". Self Confidence is concerned with how a person feel about his ability.
An Individual, who desires to succeed in life, must believe in his dreams and abilities. Senator barrack Obama had a complete dose of self-confidence. He was not scared of exploring new opportunities or venturing into unknown frontiers. Self-confidence must however not be confused with arrogance. Self-confidence is a skill that comes via training over a period of time. Success creates self-confidence, which creates more success.
Persistence
This is one of the greatest assets any serious minded individual desirous of success must possess. There will be obstacles and discouragement along the pathway to success, but one must be persistent. Never give up in the face of opposition. Be persistent and determined.
Senator Barrack Obama displayed that quality, during the party primaries and also during the final election count down, when missiles were been thrown at him by Senator John McCain. He refused to step down despite pressure from so many quarters. He persistently held on till the very end, and got rewarded at last.
Self Esteem
This is a feeling of being happy with your own character and abilities. Never be ashamed of the color of your skin or your background! Obama never displayed any sign of inferiority complex. Stand tall, even when you are in the midst of others with intimidating credentials. Hold your head high, and do not be pushed to the background.
Be Courageous
Few days to the final election, President Barrack Obama lost his grand mum, and it was a huge blow to a man who was preparing to become America's first black president. He never allowed his grand mothers death to weigh him down. Courageously, he continued to campaign and exhibit strong character befitting of a true leader. He never allowed emotions to becloud his sense of duty and judgment.
He gave it his all Whatever you desire to be in life, as long as you give it your all, you will achieve. Obama gave more than 100% of his time, commitment, energy, resources and all he had for what he desired. It was evident that he was absolutely focused on where he was going. He never gave the election a halfhearted fight. If any cause is worth its salt, then give it your all!
Posted by MAPLE DREAMS at 12:24 PM No comments: