Eleven Lessons To Learn From The German Football Team 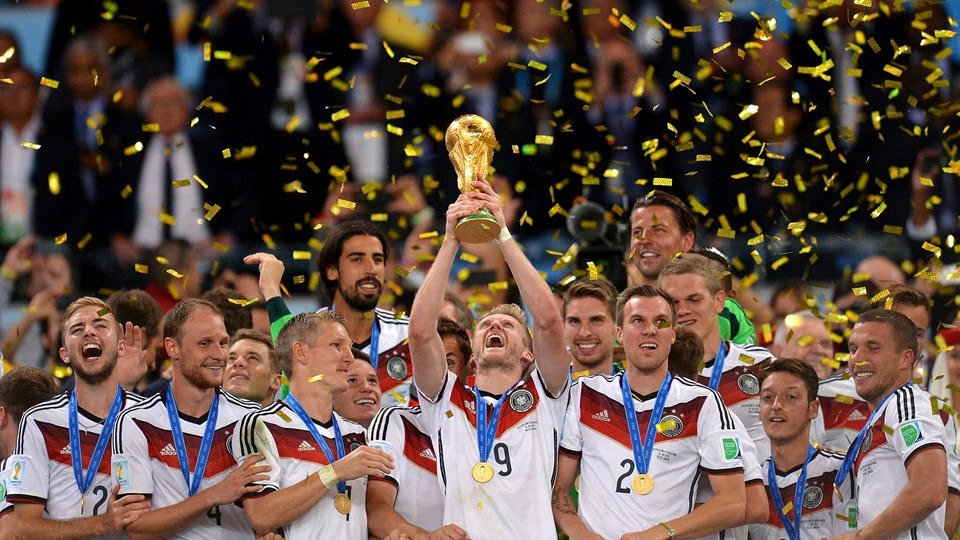 Original article on this link :
https://www.linkedin.com/today/post/article/20140713220159-175081329-eleven-lessons-to-learn-from-the-german-football-team?trk=tod-home-art-list-large_0
Germany just won against Argentina in a tight match the football World Cup for the fourth time. Oh my god, what a match! What a final! What a fight between two great teams! I´m still skaking and can´t believe it.
Congratulations to both teams for having demonstrated in a superb manner the beauty, dramaturgy, emotions, techniques, and excitement of football.
Germany has been in a world cup final eight times. The last time we won the Cup was in 1990. And now after 24 years again. With the triumph at Rio´s Maracana stadium Germany wrote history as the first ever European side to win a World Cup on Latin American soil.

Already before the final the Mannschaft had stunned the world by defeating Brazil in the semi-finals 7 – 1 when showing superior tactics, movement, discipline, will, and focus. Something which most likely we´ll never witness again when such two teams meet at a World Cup. It still leaves many speechless.
With all the euphoria let´s not forget that only ten years ago, the Mannschaft was at rock bottom. We had exited Euro 2004 without any victory. The team and the nation was unclear about its football future. Besides, even now the team is far from being perfect which is very good. In addition, there are multiple other teams playing a great football. Which is even better.

Still, one might ask what made the Germans become a winning team after all those years? What can football teams and even business learn from the German victories and the underlying patterns at this year´s World Cup? Below I´ve listed the most important lessons that in my opinion can be learned from the German football team (I´m very curious hearing about yours afterwards):

Create A Strong Vision And Set A Common Goal
The German team wanted to win this year´s World Cup. They´ve been clear and very passionate about what they wanted to accomplish: Becoming world champion! However, the objective was not only about winning, it was also about making a whole nation proud by playing excellent football and representing our country in the best possible way. To realize this goal the coach and team defined how many goals they wanted to score per match, how many goals scored against them should be the acceptable maximum, what each player would need to deliver, how exactly they would attack and defend, etc.

Embrace Innovation
This was mostly introduced to the German national team by former head coach Jürgen Klinsman in the years 2004 to 2006. It was Klinsi – with the support of his assistant Joachim "Jogi" Löw - who established an atmosphere open towards innovation and the willingness to play a more offensive, dynamic, and position changing style of football. He showed a lot of confidence, conviction, and resilience when he was attacked by many so-called experts who challenged his modern and forward-looking leadership approach.

Train Hard. Never Give Up
The Mannschaft´s success is strongly built on intensive, meticulous training, relentless preparation, discipline, and its fighting spirit. The team would never quit. They fight until the last second of each match. They understood that a tournament is a series of matches. One after another. And you need to win most of them to become world champion (all of them in the K.O. rounds). Famous German player and coach Sepp Herberger once said: "After the match, is before the match.“ These words are engrained in every German football player´s DNA. We´re not the most gifted team. But we´re one of the hardest working ones. The Mannschaft plays with mind, heart, and soul.

Stay Flexible
Although the German team is often compared with a well-oiled machine, it´s much more than that. Sure, the team follows a precise strategy and specific tactics. However, that´s only the basis to build upon something much more sophisticated: A floating format which allows players to quickly change their positions within the team if needed. Strategy and discipline are considered as enablers of flexibility to establish an open-play system which makes it difficult for the other team to anticipate possible moves. It works best, if it can be imposed on the other team by very fast and bold moves. Have the courage to change your plan, if it does not work. Löw has changed the staring eleven and kept changing the tactics.

Breed Diversity
In the past 10 to 15 years Germany formed a multicultural national football team which includes highly gifted immigrant players from Poland, Africa, Turkey, and many more countries. Besides having players with a foreign background in our team, German coaches learned a lot from foreign teams which have developed new styles (e.g. Tiki-Taka) and transferred effective concepts e.g. from Spain, France, Portugal, Holland, and Brazil to Germany. They were adapted to our needs and blended with existing techniques and expertise to form a unique and authentic style.

Balance Experience And New Talents
Jogi Löw has been the head coach for 8 years. Although he has not won any major title. He´s a coach who has well apprehended the importance of building high performance teams of experienced and talented junior team members. Miroslav Klose, for example, is 35 years old and has played in 3 previous World Cups. André Schürrle is at the age of 23 and has already scored 3 goals during the tournament. There are even 2 players in the team who have just turned 20.

Form A Unified Team
Germany are all about the team. Although there are many talented players in the team, there is no stand-out star like Ronaldo, Neymar, or Messi. Instead it´s consisting of very talented players who collaborate effectively as a team. The Mannschaft´s ethics follows our idea that individuals sacrifice themselves for the sake of the team. Every young German football player knows that you have a responsibility to your team. In this sense a football team sees themselves as a true squad. To sustain and further strengthen this spirit and attitude, Löw spends most of his time teaching, developing, and inspiring the Mannschaft. He conducts regular working sessions and meetings, he keenly creates a strong team spirit, and he addresses and resolves conflicts directly and within the team. The team would behave in the same way.

Practice Long-Term Talent Development
Over the past 15 years we have intensively studied and further developed the football academies and schooling systems of Ajax Amsterdam, Manchester United, and FC Barcelona. The German Football Association (Deutscher Fussball-Bund, DFB) is a vivid advocate of long-term career planning and development. There is a high commitment to nurture talent. It all starts with the training of our youth teams, their ongoing coaching, subsequent selection, fast-tracking in our football academies, and integration in various local, regional, and national leagues. Often the players would gain very valuable experience by playing in the highly competitive leagues in England, Spain, or Italy. The sense of common identity and the strong bonds among the players would sustain a close network.

Never Lose Focus
Every single player, the management team and the whole staff know exactly what their goal is and how they can get there. When being on their mission they would not get side-tracked and would never stop before the objective is achieved. It´s like following a program which assists to stay free from interferences in critical situations.The team moves on and constantly tries to improve. It keeps attacking. It plays limitless and attains to seize all opportunities.

Execute In Excellence
Successes of the past mean nothing in sports or football (same in business by the way). With every new match it starts all over again. This is especially true in a tournament like the World Cup. The objective of a great football team is to score goals as quickly as possible while preventing the opponent to do the same. Afterwards you will have to adjust your approach to either a more attacking or defensive posture. Either way you need to ruthlessly build your strategic advantage and to try to define the rules of the game by executing in excellence your strategy and actions.

Stay Approachable, Humble, And Have Fun
Closely and regularly interact with teams of your broader organization and as well with other internal and external stakeholders. The German team has always been open for interviews, has tried to spend us much time as possible with locals and has often exchanged with their fans and the public. That earned them respect and support. Something which in return they felt themselves and which strengthened their self-confidence and sense of being part of a higher purpose. Even after they won against the host country, native support in Brazil has been behind the Mannschaft because they stayed authentic, sincerely comforted the Brazilian team, and stayed humble. The same they did after today´s final with the Argentinian team. They showed respect and displayed an honest joy of being part of an amazing sports, tournament, and team. They did not allow anyone to put an unreasonable high level of pressure on them. It would have destroyed their passion and fun.

Fifa´s football circus has already left town and will re-unite in Russia in 2018. By then we´ll see many changes, new playing strategies, promising teams and talents.

I hope that your favorite team will have kept and/or found its mojo by then and might become the next football world champion. I´ll keep my fingers crossed. Congratulations again to the Argentinian team and all others at this year´s World Cup. It was beautiful having watched some excellent matches and very talented players.
For now, I´m very proud of the German team. Thank you guys. You are amazing! Time to toast on you. Let me enjoy with family and friends another round of beer. Or maybe two...
Please share your thoughts with us. Thanks.

*****
Andreas von der Heydt is Director Kindle Content at Amazon in Germany. Before that he hold various senior management positions at Amazon and L'Oréal. He's a leadership expert and management coach. He also founded Consumer Goods Club. Andreas worked and lived in Europe, the U.S. and Asia.

Always be ready for the worst. But prepare for the Best.

Always be ready for the worst. But prepare for the Best. 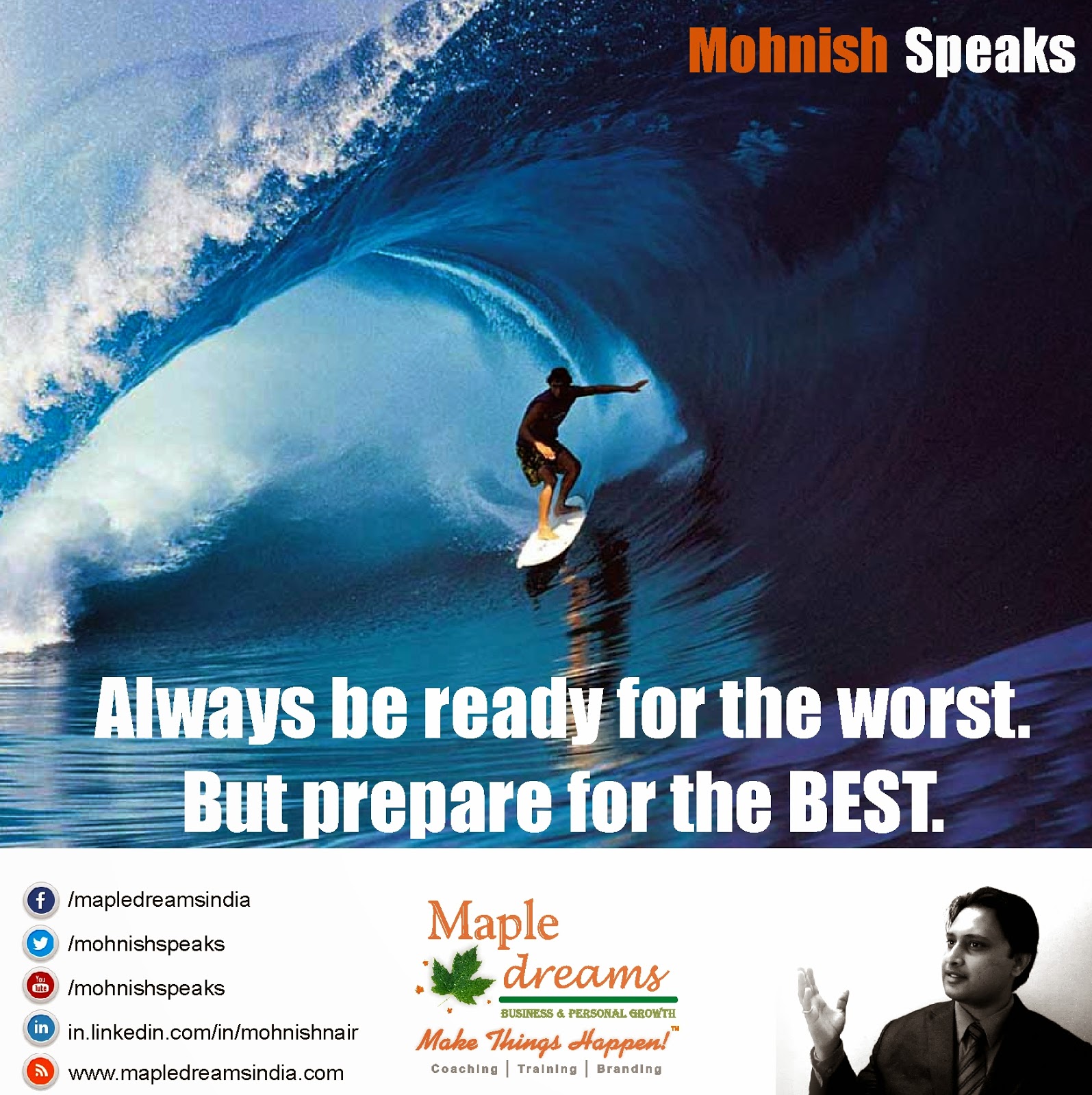