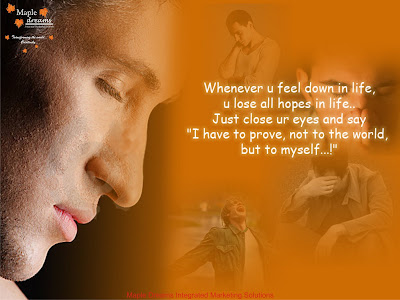 Posted by MAPLE DREAMS at 9:48 AM No comments:

Pulling Your Team to Success 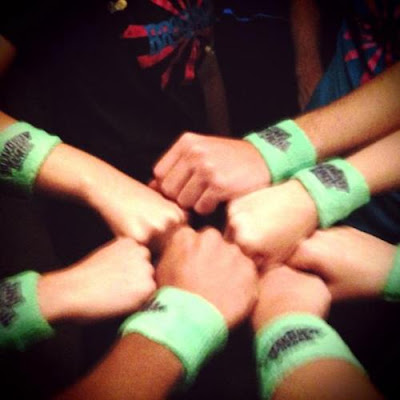 Have you ever flipped through the channels on your TV and ran across one of the strong men competitions? You know the type - one man attempting to move a jumbo jet so many feet, and the man who can do it in the fastest time wins. Let me ask - Are they pushing or pulling the jumbo jet? If you said pulling you are correct. Do you know why? When you pull something like a jumbo jet you are using leverage to your advantage. The exact same thought process holds true when building a team - you cannot push them to be great - you have to pull them, therby becoming great.

It goes without saying how critical the concept of leading by example is. Over the years, the catch phrase has become - "Don't talk the talk, if you can't walk the walk." The more involved a leader is, the better - - so long as it is involvement, and NOT micro management. The team needs to know the leader believes in them, and that the leader is part of the team.

The founder of a landscaping company in suburban Washington, DC, has an amazing crew of workers. On a recent job they did for me, his foreman/team leader for the project told me he had been with the company for over 20 years. And the average tenure for the workers on that crew was over 10 years. In an industry where employee turnover is higher than most, the founder said "It is about treating them right, and working alongside of them." The team leader did this throughout the entire day. When the founder dropped by later in the afternoon, I noticed that he hustled right along side of the hourly workers. This assisted in the development of trust from the team. The founder not only talks the talk - he walks the walk everyday with his crews. His participation with the each team demonstrates how he developed trust with each team and thus how the team leaders work with each team to build the next level of trust and respect.

If your organization is looking to reduce employee turnover, develop long lasting high performing employees, elevate your team from mediocrity, and create a team, that delivers results, simply follow these eight simple steps.

The statement "if you're not growing, then you're dying" is true not just for plants and flowers - it is also true for teams. Whether it is an individual learning a new skill set, or the team as a whole learning a new process, it is critical to continue the growth cycle. Individually, everyone should be reading at least 2-4 non fiction books per year and taking at least 6-8days of training to keep the team growing. Remember, the more people learn, the more they want to apply. This increases productivity and attitudes of everyone.

Break Out Of Your Comfort Zone

Even the best of us can find ourselves in a cycle which can become a rut. Don't be afraid to shake things up a bit - do something new and different, frequently. Different meeting days and times; get team members to run the staff meeting and rotate them regularly, these are just a few ideas. Shaking things up applies to us individually as well as to the team as a whole.

Do not be afraid to get in the mix with the front line workers and show them you can indeed work with them and not just "be the boss". Trust and respect are vital to any leader's success and this is one of the fastest ways to earn that trust and respect. Everyone has leadership skills and it is not just the "boss" who is the leader.

Always Have A Strategy

Even though you may like to fly by the seat of your pants, be sure to have a reason for everything you do. This could be as simple as helping a colleague or teammate improve his or her skills. Another way to develop a strategy is to plan a retreat. This is a great motivator for the entire team. It can also get the on track and ready for the next large project. Remember, once your goals are set, stick to them.

Make sure everyone (individually as well as the entire team) is held accountable. When management holds individuals accountable, team members will in turn hold each other accountable and the bar is naturally raised. No one wants to let their teammates down; this behavior is natural. An added benefit is that trust is strengthened throughout the entire team.

We get so caught up in recognizing individual talents (continue to recognize and reward individuals) that we sometimes forget to reward the team for the team's accomplishments. Several years ago, a team finished a rather large and detailed project. They wanted to reward themselves, so the team took the afternoon off and played a few rounds of miniature golf. Even though they talked about the golf outing over the next several days, they were still focused on their next project days flew by, errors dropped, and attitudes soared.

Tap The Talents Of Others

Every team has hidden talents. Take the time to learn about your teammates and uncover their hidden talents. You'll discover how different members can contribute to the team in many more ways. Learning is great regardless of its origin; knowledge is transferred deeper when it comes from a teammate.

Keep The Lines Of Communication Open

It is critical that the team has no secrets with each other or the leader. Everyone should feel comfortable in talking with everyone else. It keeps the conflict healthy, and allows the team to grow as well.

Following and implementing these strategies will help develop any team, at any stage by; building more confidence and greater morale among team members, creating more trust across job functions, ultimately increasing productivity for the future.

Posted by MAPLE DREAMS at 9:42 AM No comments: