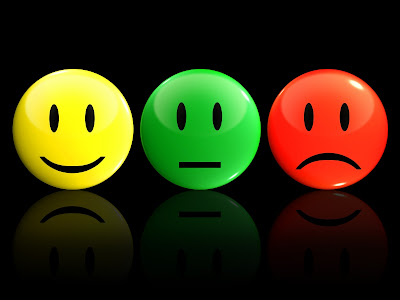 
Moods play a major role in our lives. They govern our feelings and actions and if not managed well, they can create havoc and chaos in our minds leading to depression and other mental illnesses. Do you find that something as simple as the weather or the morning headlines can alter your mood?

Moods are basic psychological states that can occur as a reaction to an event or can surface for no apparent external cause. A mood is an internal, subjective state. It is also a relatively long lasting emotional state. Moods differs from emotions in that they are less specific, less intense and less likely to be triggered by a particular stimulus. People speak of being in a good mood or a bad mood and this often lasts for days and not hours as in the case of a feeling or an emotion. Moods also differ from temperament or personality traits which are long lasting.

Moods can manipulate how individuals interpret and translate the world around them, and can also direct their behavior. In a study done by Niedenthal and Setterlund (1994), research showed that individuals are tuned to perceive things that are congruent with their current mood. Both the pessimist and optimist will prove themselves right as they manifest what they have interpreted through the lens of their mood!

According to psychologist Robert Thayer, mood is a product of two dimensions: energy and tension. A person can be energetic or tired while also being tense or calm. According to Thayer, people feel best when they are in a calm-energy mood, and worst when in a tense-tired state. The low energy arousal coupled with tension, as experienced in a bad mood, can be counteracted by walking. Thayer suggests walking as a means to enhanced happiness. (Wikipedia, 2011)

Research has shown that, contrary to the stereotype of the suffering artist, creativity is enhanced most by positive moods and happy thoughts.

People have often used food to regulate mood. Take for example chocolates, yes that dark gold bar of pure happiness! The benefits of dark chocolate come from resveratrol, an antioxidant and immune system booster. It also has the ability to boost brain levels of endorphins as well as serotonin, a mood-altering chemical on which many antidepressants act. The recommended dose however is only one ounce per day, so remember not to over indulge. Wine has been used for eons to create a romantic mood.

German researchers studying garlic's effect on cholesterol discovered that participants being treated with garlic experience an elevation in mood. Now this does not necessarily mean good mood, it also implies that one can become e-motional - 'energy is in motion' and perhaps not one in control! Pilots are advised not to eat garlic up to 72 hours before flying as it slows down concentration and doubles or triples reaction time. Knowing what to eat is an important part of food-mood management!

Music can also alter moods. Niedenthal and Setterland used music to induce positive and negative moods. Sad music was used as a stimulus to induce negative moods, and participants labelled other things as also negative. This proves that people's current moods tend to affect their judgment and perception in all areas of their lives. Surround yourself with music that will uplift your spirits and not one that will strip the light of your aura.

People who tend to be moody are less predictable and difficult to work with. They are needy, stroppy, self-centered, procrastinators and susceptible to sulking. People are less inclined to want to work with them as the other party is not always sure of how they may react and so they hesitate to even ask them for favours. People who have a stable and consistent mood make the best leaders. They have a focus and consistently keep their vision well oiled.

The difference between a response and a reaction is that a 're-s-ponse' is thought out or pondered over whereas a re-action is to re-enact something that has taken place previously. For example... you begin your day with an argument with your spouse. As you drive to work, you mull over this incident in your mind. By the time you get to work, the receptionist greets you with a big bright smile (as she is trained to) and at that moment you ask her in an irritated tone, what has she got to smile about! The anger built up from an earlier incident is brought forward to the present incident; you have brought forward the anger. Part of learning to manage moods is to be able to segregate incidents in our mind and not to let them overlap.

Sickness and ill health can also make a person short fused and less tolerant. We become vulnerable and susceptible - knee jerk reactions. When the body is sick, we have to ensure the mind is not! And so for times like this, we need to be sure that we have acquired enough power through meditation that will assist us at a time of need. The healing process will be faster if we maintain the right attitude!

Hormones also play a major part in understanding why certain moods erupt at certain times. Coupled with modern day stress, it creates anarchy in the soul. Learning to understand the workings of the mind and body is the key to prevention.

The atmosphere of a place can also induce certain moods. Walk into a church or hospital, funeral parlor or shopping mall and you certainly won't be feeling the same way inside. Know what you want and surround yourself with healthy and positive people and be selective about the places you frequent.

It's time... to take responsibility and not allow external factors to affect your mood. As a master of your mind and body, take time to understand what triggers your moods. Play some light music every day to soothe your soul. Eat your meals in a mindful state. And slow down before you end up in a mood ditch that is hard to get out of!