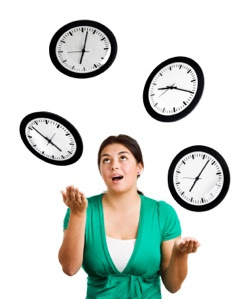 
It's a turbulent time for working professionals who want to keep improving their productivity.

The number of messages coming at them each day is growing, as is the number of communication channels. There are also more choices of personal technology than ever before, with new announcements of the latest gadgets such as iPad's, smartphones and netbooks dominating the news.

Software options are also increasing, as Microsoft Outlook, GMail and Lotus Notes have evolved from simple email programs to hubs for managing the bulk of many users' time demands.

Unfortunately, there is little help from those who teach time management programs.

I remember when my friends at AT&T office we worked at in the early 1990's came back from a time management class with new DayTimer diaries in hand. They admitted that the class itself was no good, but that the tool itself was quite useful. I eventually bought my own diary with all the useful inserts, and went about fashioning a system of my own.

Fast forward to 2010, and we have millions of electronic gadgets flying off the shelves, but the focus has shifted. DayTimers were clearly "productivity tools." Smartphones, tablets, laptops and netbooks are used for everything ranging from banking, to ecommerce to pornography to time management. Many people who buy them are simply using their unproductive old habits with this new technology to wreak havoc on their productivity.

Thanks to smartphones, checking email once or twice a day has turned into a 24 hour per day habit, and there are many who check their email more than 100 times per day. The habit of sending a message as soon as you can, has become an excuse to send a text while driving at 80 mph. Answering the phone whenever it rings has become an action that involves furtive whispering because the recipient of the call in a wedding. Sending email has become an action that's performed with the BlackBerry just below the surface of the table, in what's now being called "The BlackBerry Prayer Position."

Old habits plus new technology are a prescription for trouble, yet the smartphone manufacturers have made no attempt to teach users how to use them to enhance their productivity. The assumption seems to be that as long as you have a lot of electronic features at your fingertips, then it's up to you to figure out how to become more productive as a result.

It's no wonder that the number 1 use of smartphones is to play games, according to the most recent research. "Productivity" was a mere 10th on the list.

The problem is that things are changing so quickly that a book written today about "BlackBerry Productivity" won't be released until two years from now, and by then the devices that are featured in the book will be stale, and out of use. Anyone who thinks that they can prescribe a set of detailed practices for a smartphone user is likely to fall fatally short through no fault of their own.

It's impossible to give detailed prescriptions to today's managers, because the unique blend of habits, software, gadgets and web services being used makes it too hard to guess what they actually need. Instead, what's required is someone to tell the truth,and that they stick to certain fundamental principles regardless of whether or not they decide to switch from an iPhone to a BlackBerry tomorrow, and their company decides to get rid of Lotus Notes in favor of Outlook.

The truth is simple -- there are only a handful of people on the planet who are using someone else' system as they were taught. Most of us have devised something that works for us, and us alone. When the time for change comes upon us, it's either because we want to take advantage of some new technology or deal with more time demands than we ever have. We need help in making the switch.

Time Management 2.0 is all about users making intelligent upgrades to their time management systems based on their evolving needs. Instead of trying to follow an outdated prescription, users must undertake the following three steps:

2. Figure out where the holes are, relative to where one wants to be

3. Fill in the gaps with changes in habits, gadget technology, software, etc.
Posted by MAPLE DREAMS at 9:44 AM No comments: