Posted by MAPLE DREAMS at 6:29 PM No comments: 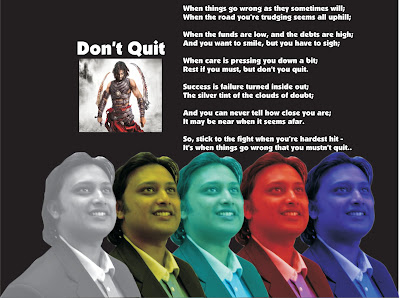 Posted by MAPLE DREAMS at 5:08 PM No comments:

Forward and Backward Integration - The Mantra For the Effective Leadership

Now take the case of the highest leader of the country who may be a king, Prime Minister or President. Does he only have to lead his people? Whether he is not required to integrate himself with others?

The answer is no, as everyone has to integrate not only backwards i.e. with his followers but also with the people whose cause he is serving. It is to understand the every citizen of the country is not the follower of even the greatest President. His followers are very limited i.e. the active workers of his party. At the most he can consider himself to be the leader of the government and the government executives whom he heads. Yet he has to look for the benefit of the entire country who are like the shareholders of the country and many of them may not be his supporters.

Usually the follower's expect the leaders to work for their benefit as they directly contribute to the performance of the leader. However, the existence of the leader not depends not so much on the followers as on the owner of the company i.e. the shareholders who want him to deliver value to them.

Hence the prime job of the leader is to integrate with the owner who stands on the top of the hierarchy with the followers. The followers must understand that they are not working for the leader but for the benefit of the company or the country through the leader. A leader is thus nothing but a ladder through with the worker is reaching the real owners of the company. A leader, therefore, not only leads but also he creates a linkage through with he connects the people above him to the people below him.

Life is a mystery which can not be explained either by science or by scriptures. Truth has a body and a soul which we call science and religion. Contrary to popular perception, they are not opposed to each other but complement each other like body and soul. In fact, they can not exist without each other.
Posted by MAPLE DREAMS at 9:37 AM No comments: