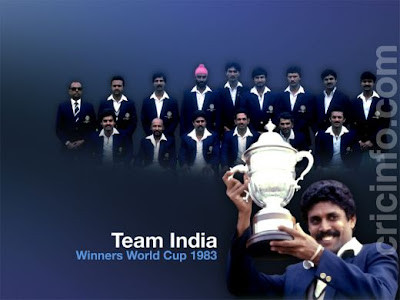 India's 1983 cricket World Cup victory over the mighty West Indies is widely acknowledged as the defining moment in the history of Indian cricket. Under the spirited leadership of Kapil Dev, a determined Indian team exploited the English conditions to clinch the coveted title.

India made their intentions pretty clear by shocking the favorites West Indies in their campaign opener. In their next match, India thrashed the minnows Zimbabwe with Madan Lal playing a pivotal role. However the euphoria over the successive wins was short lived as India was dealt out a 162 run thrashing from Australia just two days later.

India's second Group match against Zimbabwe unfolded high drama. Batting first, India was looking down the barrel with five wickets down for just 17 runs on board. But skipper Kapil Dev chose the occasion to lead by example and his whirlwind knock of 175 set the stage for a memorable Indian victory.

The final raised the specter of an Indian humiliation in the hands of the Goliaths of world cricket, the West Indies. Even though India had beaten West Indies in the group stage, the wise and knowledgeable of the game predicted a comprehensive win for the Indies.

Batting first, India were bundled out for 183 in the face of the hostile West Indian pace attack. However, when it came to their turn, the West Indian batsmen collapsed and ultimately fell short of the target by 43 runs. The Indian spirit was epitomized by an astonishing catch by Kapil Dev who sprinted back 20 yards to latch onto the skier from the marauding blade of the great Viv Richards.

As the news filtered through to the fans back home, it led to unprecedented scenes of jubilation throughout Delhi and Calcutta and the rest of the country.